(Schroll down to read about the projects) 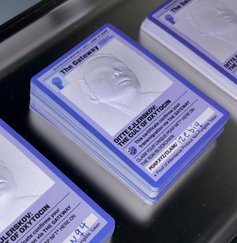 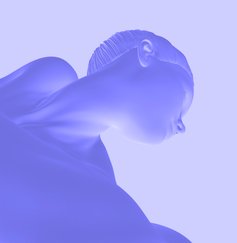 The Gateway is a series of uniquely numbered NFTs on Xdai represented by a physical embossed certificate, edition of 228

Only if you received a physical certificate at Nikolaj Kunsthal in Denmark, you could mint your POAP (proof of attendance protocol) NFT on the xDai chain via your personal POAP.XYZ/CLAIM/ - link on the card.  The opportunity for blockchain ownership was open until June 1st 2022. Total number of mints were 228.

The POAP was issued via poap.xyz - they too have an app for the POAPs. Here, or simply through their site, you get a unique badge that is supported by a cryptographic record. Other POAP badge-apps can hold this badge as well. These badges are Non Fungible Tokens (NFT). You can migrate your POAP from these apps/website on the xDai chain to The Ethereum mainnet. Poap.xyz is open source and community owned.

In The Gateway the powers of Oxytocin and Adrenaline take you on a journey into the battle between love and survival. Learn to let love take charge of your avatar. The Gateway is a 13.31 min 8 projector audio and video installation made for the show The Cult of Oxytocin at Nikolaj Kunsthal in Copenhagen, DK in 2022. Voice over written by Ditte Ejlerskov, DK, narrated by Tattiana Mai, CA. Concept and film design developed, edited and mastered by Ditte Ejlerskov, DK with help from Shrikant Khot, IN and Henrik Yang, SE. Soundscape idea and design by Ditte Ejlerskov, DK. Mixed, mastered and composed by Bibek Giri, NP. Whats the film here.

Digital sculpture minted as an NFT on MISA/Johann König, edition of 5

The Wrestlers is a virtual reality NFT sculpture developed in collaboration with Museet for Samtidskunst / the Museum of Contemporary Art, DK. On the marketplace MISA/Johann König the sculpture is represented as a GIF. Follow this link to try the browser version of the 3D sculpture or get the augmented reality code for your own phone camera or download the 3D print files for your computer: https://virtuelleskulpturer.samtidskunst.dk/en/

Concretely the sculpture reimagines the Uffizi Wrestlers, a marble sculpture of two men wrestling from the first century AD that epitomizes the idealized male body in antiquity. The NFT is thus part of a millennia-long Eurocentric tradition of copying, and sometimes slightly modifying, this sculptural representation of the two struggling bodies. The Ufizzi Wrestlers is itself a marble copy of the now-lost Greek original in bronze. Other replicas in bronze and plaster exist in numerous copies across the globe.

Despite being one of Western art history’s most well-known works, its origin and the original artist remain unknown. Through the Creative Commons license, Ejlerskov seek to further layer the history of copying and reinterpreting the classical sculpture. A collector of this NFT acquires the blockchain certificate ownership, but at the same time the artist waived her artistic copyright to the Creative Commons license (CC BY-NC 4.0).

“I wish to test if it is possible to reshape Western cultural history without entering discussions on the norm body or objectification of women. To me, the wrestlers are avatars without sex appeal. The project is of course shaped by my personal cultural viewpoint, and thus by definition it is Eurocentric. My focus is open-source sharing and feminist discourse set in motion through the act of making. And my motivation is deeply personal. Additionally, to me this NFT entails a new way of thinking about ownership. While the NFT exists as an edition of five, the virtual sculpture is licensed to the public domain, enabling wide access to the source files. The NFT will never change, but the virtual sculpture will gain a life of its own in our shared digital public space. People from all over the world sent me photos of their usage of the now global public sculpture.”

The Walk is a 2.33 min animation minted as an NFT on Foudation, edition of 1

The Walk is a walkthrough of an exterior scene inspired by the sentiment of Renaissance painter Fra Angelico and drawings by same-era-architect Hans Vredeman de Vries.

The scene was created for the epitomes Oxytocin and Adrenaline. Oxytocin (the love hormone) is released during hugs, sex, and especially in relation to childbirth. The opposing hormone is adrenaline - the intense fight or flight hormone, released with the intention to rescue us in a stressful situation.

The sculpture wants to tell you that opposing hormones cannot be present in the human bloodstream at the same time. It is one or the other. An unbroken battle.

This collection is an ongoing bonding curved trading cards series. 100 1/1 unique works will be minted in total.

The images depict a sculptural idea created in antiquity, developed through a painful human experience, yet born in the meta verse as women where it will live into eternity.

This series explores smooth monochromatic crops of a sculpture of two wrestling women. In another time or very much elsewhere there was a sculpture. It was made by a woman so therefore it depicts women. Its main intend is to ask you to look inwards and learn to lean into love.

Frozen in time, these women represent hormones fighting within the human body. Oxytocin and adrenaline. For women, oxytocin (the love hormone) is released during hugs, sex, and especially after childbirth. The opposing hormone could be adrenaline - the intense fight or flight hormone, released with intention to save us in a stressful situation.

The sculpture wants to tell you, that opposing hormones cannot be present in the human bloodstream at the same time. It is one or the other. It is an unbroken battle. One has to win. In your life, which one do you feed? Which one do you let control your reality? The creator’s personal struggles with this – and therefore aim with this work – is to view the scenario of this fight from all possible angles, in order to learn the game of the bloodstream. Hopefully these images become tokens for life-changing behaviour-shifts for many individuals. Keep these images in your phone. Keep this token close to you. Let your awareness of this battle change your blood, so that your blood works for you and not against you.

This collection is ongoing. 20 1/1 unique works will be minted in total.

Inspired by the sentiment of Renaissance painter Fra Angelico, and specifically the drawings by same-era-architect Hans Vredeman de Vries, I have created the scene for the epitomes Oxytocin and Adrenaline.

This series holds several colour concepts exploring the scene of these wrestlers in this exterior scene - seen from different angles.

Apart from my trading card series (The Prudent Crops), this digital painting was created in the vein of my analog representational canvases. Therefore the primary collector of this digital painting will receive a physical giclée print on 50 x 50 cm Hahnemühle Albrecht Dürer 210 gsm paper. This gift is separate from the NFT at the secondary sale and belongs to the primary collector forever. Both print and TIFF explore a dreamy rendering with soft lines and edges. Any collector of 3 random pieces from The Prudent Crop Series (OpenSea) can swap the 3 pieces for 1 piece from this new collection. E-mail for trade guide.